Marco Pasanella runs a wine shop in New York City.  In an earlier post, I wrote about a visit I made after Hurricane Sandy and reviewed three proprietary wines that Marco selects from Italy.  I learned about his shop when I stumbled across his book while doing some competitive research for a book I have been working on for a while.  My heart missed a few beats when I read the previews of this one: Marco's story comes from a similar perspective: bemused, sometimes befuddled, occasionally aggravated observer of the weird and wonderful world of wine.

Marco's previous world was focused on interior design, very successfully.  He and his wife bought a building and then lost their tenant.  The ensuing search for a solution led him to wine retail.  As an outsider, he carried the typical delusions of life in the wine business: he wanted to taste good wine, travel and find more.
Reality stepped up pretty quickly and knocked him around a bit.  Sharing tales of learning lessons the hard way initially had me enjoying his comeuppance.  I have seen, all too often, people leap blindly into the wine world, ignoring advice and acting like they know better than long-time professionals, only to discover how messy and challenging the world of selling wine can be.  Eventually, he admitted mistakes and lack of understanding and I swung fully around to rooting for his success.
There is no better example than when he placed his Ferrari in the middle of the shop, saying it "symbolized a carefree, dolce vita dream."  Life must be good if owning a Ferrari is carefree.  Later, he had to sell the car to "shore up our finances," and thought about "another crowd-pleasing store fixture.  But not another slick sports car.  The world had changed.  I had changed."  You'll enjoy the journey that gets him to that revelation.
The layout of the book is brilliant, with each chapter explaining a step in the process of growing grapes and making wine that relate to what is happening in his story.  He includes some interesting recipes as well.
I have minor quibbles with some of his descriptors and some of the information included in the appendices but nothing substantial enough to dissuade anyone from reading this engaging tale.
It reads more as a story or bio than a wine book.
There may be revelations for some readers about the way wine business is conducted but I wanted more.  [Fortunately for the prospect of my book being published, he does not go as deep or share as many stories as I do].  His naivete about the wine business proved appealing rather than revealing.
He spends a lot of time on Italian wine which may lose some readers.  Stick with it.
I suppose my biggest gripe as someone who toiled in the trenches of the wine industry for so long is that he keeps waxing poetic about doing what you love but then hires people to handle most of the actual day to day running of the shop.  Maybe that's just sour grapes on my part.
Pull a cork (I recommend Pasanella & Son wines if you can get some), pour a glass and enjoy the book.
Available at the usual outlets.
Posted by Geoff Worden at 7:30 AM No comments:

At the risk of being predictable, or boring, here is another Oregon pinot noir review.  In case anyone had any doubts, I really like pinot noir and I am quite enamored of those from the Willamette Valley.
Cristom has always been one of my favorite Oregon producers.  The wines are precise and full of flavor, they are complex but drinkable and the aromas almost always prove entrancing.  Oh, and I can actually buy some in Louisiana.  I do not see single vineyards here very often so the bottle of Jessie Vineyard 2000 I found before leaving Portland to return to New Orleans excited me.
Despite the stellar wines and reputation of Cristom, they do not appear on everyone's radar.  They should.  Located in Eola-Amity Hills just north-northwest of Salem, Cristom enjoys a spectacular location.  Neighbors include other favorites of mine - St. Innocent, Bethel Heights and Witness Tree, Evesham Wood is also in the area. 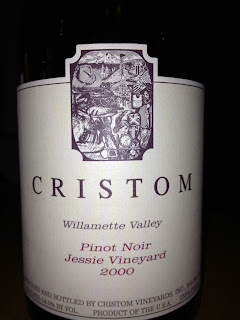 Interestingly, the 2000 label only carries the Willamette Valley designation because Eola-Amity Hills did not become an AVA until 2006.
They began planting Jessie's Vineyard in 1994.  It is very steep and "a challenge to farm."  Five different soil types appear in the vineyard and this leads to amazing complexity in the bottle.  The nose blossomed immediately but the finish was tight and a bit tannic for the first 30-40 minutes.  (2000 was an outstanding vintage in Oregon that got overlooked due to California's higher profile lackluster results.  The wines have weight but some also have hard tannin that has never integrated well.)  Fortunately, this bottle came around beautifully and drank well for three hours, then it was empty.  There was a meaty quality on the palate and lovely deep fruit.  The wine expanded in the mouth and bloomed on the finish.  A slight browning on the edge told me it was not a current release but nothing in the color showed the wine to be as old as it was.  This is a wine with plenty of life left in it and I wish I had a few more bottles!
The 2010 vintage just got featured on the cover of Decanter magazine. So, it may be harder to find, but the Cristom store has some for $50 a bottle.  It will be another winner that will stand the test of time.
Posted by Geoff Worden at 9:55 AM No comments:

Geoff Worden
New Orleans, Louisiana
Insights and thoughts about the weird and wonderful world of wine from a passionate participant.